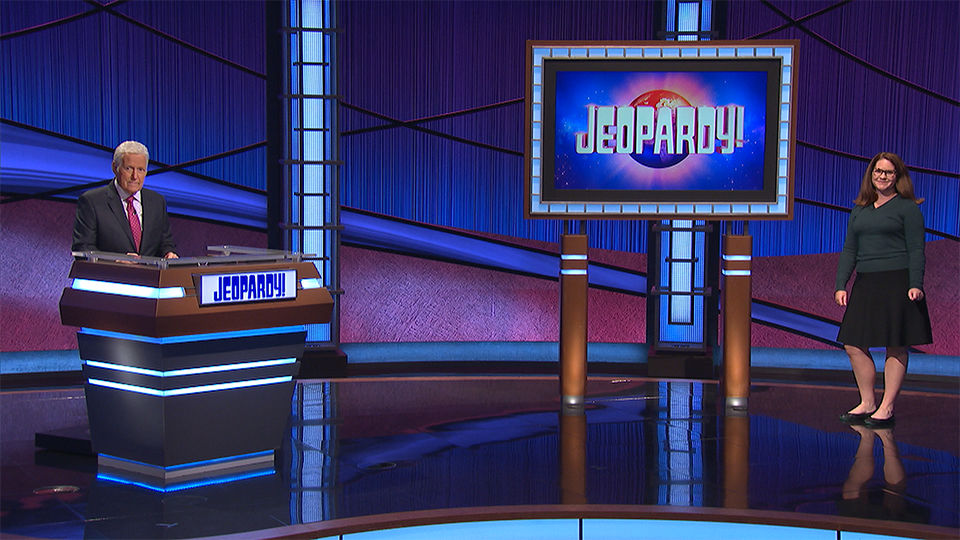 A member of our Land Development team in the North Phoenix office, Chandra McCarty, P.E. was recently a finalist on Jeopardy…even meeting Alex Trebek, the show’s 40-year host during a global pandemic. It’s fun to know he got to pick her bio story that each contestant introduces themselves with, although she wishes he had picked a better one!

More on her experience is in a quick Q&A below:

How involved was the qualifying process? I’ve been trying to get on for a few years now. There are about 217,000 people that take the test each year, and 400 make it to the show each season. I had my first in-person audition in Portland about 2.5 years ago. I made it to the contestant pool but never got drawn. Then I qualified for another audition in July via Zoom, and got the call in August that I’d be on the show in September! If anyone is interested, there is an online test they can take anytime to tryout for the show. Even just trying it out is a lot of fun! https://www.jeopardy.com/be-on-j/anytime-test

Where was it recorded, location, live or virtual? I recorded in person at Sony Studios in Culver City, CA on September 14. They tape 5 shows a day, twice a week. My name was drawn for the last show of my tape day. Sony was extremely meticulous while we were in the studio and had very strict COVID protocols that we all had to follow.

Anything else about your experience that made it special? I was lucky enough to be on the show with Alex before he passed, and I’ll always be grateful for that. (Even though he picked a really lame story for me to tell during my interview, instead of the ones I thought were more interesting…)

It’s a lot harder to play in the studio than from your couch!

We can’t even imagine the pressure once you’re live on camera! Thanks for all you do Chandra, and congratulations on your second place finish from the team at EPS Group!!

We approve this link, but it’s not on our website! Click your desired link again to view.